Learning in a Time of Coronavirus

Renewing a Sense of Ownership

So here we are, after the decision to go with another three weeks of school closures, at least. It’s a sensible option – why take unnecessary chances now that we have the light of a vaccine at the end of the tunnel? This week, I’ve seen feelings of extreme relief at the news that vulnerable family members will be receiving the vaccine, along with feelings of extreme anxiety from a relative working in childcare who was terrified to go back to work on Monday. Heightened emotions that are the new normal now.

Amidst those highs and lows, Wicklow Sudbury School is somewhere in the middle. There will be students and staff who will be gutted we’re not back, and others more circumspect.

For me, it’s always worth looking for the opportunities in these situations, and having a bit more time this month affords us a big chance to get ahead of the game on a lot of things, some of which I’ll discuss below.

It’s been a unique year for us, with more student turnover than in any other year by far. A half dozen students who had grown into very important roles holding the culture in the school and helping newer students all graduated last Summer. Nine more have joined, and while that may not seem like a big transition in a world where thirty plus students per classroom is par for the course, a democratic school is very different in its culture and its norms compared to the rest of our society. When community members have been immersed in a culture of hierarchy and competition and continue to live in a culture outside school that is defined by those ideas, there is a real balancing act to be had in growing and maintaining a culture of empathy, trust and safety together. When students graduate, they take with them three or four years of conversations about the workings of the school, trust-building experiences, and so on. 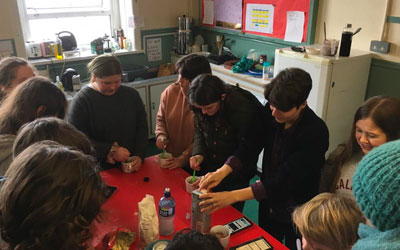 I’d like to think I’ve built up very strong connections with many students, cultivated through one on one conversations, chats over a cup of tea, resolving situations together, discussing issues in school meetings, joking, playing together and so on. Some of those students wouldn’t really have noticed I existed for their first six months they were here. So when you take about a quarter of the community (with more new students joining on a regular basis for the foreseeable future) and reset those relationships with staff to square one from square fifty, it has a significant effect.

Of course, in many ways that’s quite exciting, it’s great to be able to work with new students now that we’re armed with everything we’ve learned over the last four and a half years. But first comes the hard legwork of generating buy-in and creating the spaces for everyone to assume their own sense of ownership. A lot of the things we do have been put in place by students who are no longer here, and those ideas came to them after completely different experiences than the new students are bringing with them. They arrive into the space governed by rules and norms that may feel like ill-fitting hand me downs. So it’s important that new students get real chances to put their own stamp on proceedings. It’s one thing being told in abstract that this is your school and you can shape it, but in the same way, even if someone had all the money in the world, it would be worthless until they saw what could be bought with it.

Many of the students haven’t yet really felt what it’s like to ‘spend’ the money that is their equal say in the school, but we have some special days coming up specifically for that to happen.

Play is the glue that binds us

A few years ago, before I joined the school, I was lucky enough to interview the former headmaster of Glenstal Abbey School and then abbot of Glenstal Abbey, Marc Patrick Hederman. I wouldn’t have thought Abbot of Glenstal Abbey was a position that screamed progressive, but on matters of education, this guy has a lot sussed. He wrote a book called The Boy In The Bubble: Education as a Personal Relationship, which, as someone just finished with a very negative secondary school experience, resonated with me and has had a big influence on me as an educator.

He emphasised the importance of a trusting relationship between student and teacher, and believed that, without that connection, the spark of curiosity will have a harder time igniting.

I mentioned building up bonds with students through a variety of shared experiences, but the ones that have really stood out for me by their absence this school year are the playing and joking, especially of the physical variety. Until they were taken away by Covid and the need for physical distance, I didn’t truly realise how important those things were for building rapport with new community members, at least for me. This was one of the main ways that I built the trust that Marc Patrick spoke about.

Little things, like tapping someone on one shoulder when you’re on their other side, playing ninja (a reflex game like a mix of dance-tag and non-violent slaps – this one is gold), making a secret handshake, giving someone a piggyback, having a joke arm wrestle, doing an impromptu skit, allowing yourself to be rugby tackled onto a couch, playing sports and so on and so forth. Whether it’s the oxytocin that flows from these moments or something else, boy have I noticed their absence. Even in relationships where I know we’re completely at ease with each other, it makes it difficult to act like it. It certainly makes it much harder to break down newer students’ perception of you as a traditional teacher or authority figure rather than a facilitator and collaborator.

I can only speak for myself – other staff have still had activities like circus club, outdoor club and self-directed dance that may have helped address this oxytocin deficit (mine are more video and discussion orientated than physical this year), but personally there have been times this school year where I’ve felt, compared to previous years, like a bowl of Weetabix with no milk.

Of course, you can’t have those fun interactions all the time with everyone, but I believe that even for students who are only in proximity to these kinds of easy going japes, they help put people at ease with you as a staff member and with their environment. It’s something that would be quite hard to study, but I imagine the effects of losing these interactions on our community have been consequential enough. So what do we do with this information? It’s not clear to me yet, but, as Orson Welles is quoted as saying, “The enemy of art is the absence of limitation.” I’m sure when we reflect on this period where we were limited – shorn of our usual slapstick shenanigans – we’ll get a lot of insight from the other types of interactions that gave rise to trust and camaraderie instead. Therein lies the beauty of a democratic school and its flexibility – every challenge is an opportunity to learn, and there are no sacred cows or dogmas in the way of the necessary evolution.