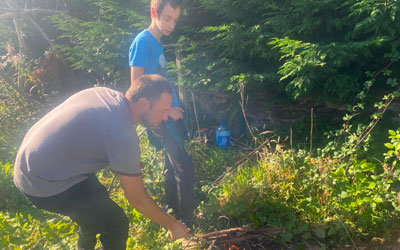 One Monday morning at Wicklow Democratic School, a number of students knelt around a fire pit in the schoolyard. It was time for morning activities with Home Groups, and this group decided to use the time to build a fire. They took turns lighting wool and thin sticks with steel and flint, and then, when that small pile ignited, they began to create a waffle pattern with thicker sticks, overlapping layers to build a bigger fire.

“You have to treat a fire like a baby,” Marc, a fellow facilitator at Wicklow Democratic School, told me as he knelt in front of it.

He spoke about feeding the fire continually, tending to it gently, and approaching fire like a living thing – something that is steadily growing but sometimes unpredictable.

I asked Marc about his own experiences with nature and fire as a child. He talked about living near Yosemite National Park in California in the United States, and spoke about how he spent most of his childhood outdoors. Marc said that nature, to him, was more about feeling a sense of connection and belonging to the world than just a pretty thing to look at. Marc continued to say that this feeling is similar to that feeling of closeness that he feels with good family and friends.

“It’s why I fell in love with nature – that feeling of connection,” he said.

I asked Marc if he had attended a Boy Scouts program as a child. He told me that he had, but he often found it too rigid.

“Boy Scouts teaches a lot of skills,” he said, “but there’s a difference between connection and information.”

Marc felt that Boy Scouts approached nature like something to fight against – teaching the scouts to compete for best ways to battle the elements in a hierarchal and somewhat militant atmosphere. Marc, in developing his passion for nature, was more inspired by studying indigenous culture and reading the works of Jon Young ( author of The Art of Mentoring and Coyote Training and creator of the audio series Seeing Through Native Eyes). Indigenous cultures emphasise the importance of approaching nature as though one would approach building any respectful, healthy and symbiotic relationship.

“Once you have connection information flows freely,” Marc said.

We spoke about how connection and trust relaxes the mind enough so that a greater amount of new information can be processed and stored in the brain.

As a young adult, Marc received a degree in Forestry. He was employed for a time in a community-based home school environment in New York where he worked alongside children to build that relationship with nature – examining animal tracks, carving toothbrushes out of dogwood, and identifying best plants for medicinal remedies and food. He brought a lot of the information he gained in the States to Ireland when he set up his own forest school in Wicklow (3 Trees Forest School). Marc offers classes at Wicklow Democratic School and takes opportunities to teach students about nature and outdoor skills whenever a student shows interest in any given day.

Matilda (12) was one of Marc’s students at 3 Trees Wicklow before she enrolled in Wicklow Democratic School. Like Marc, Matilda’s earliest memories are centred around nature.

“Nature feels like I can just be myself,” she says. “It just feels easier, you can learn for yourself, learn by seeing and doing.” Matilda’s eyes lit up as she spoke about building dens in trees with her sister as a refuge from hard days as a young child. She smiled as she reflected on moments of making necklaces and pencils out of wood, and of learning how to build and light fires at 3 Trees (she showed me how to use the steel and flint more efficiently and quickly).

Matilda also spoke earnestly about how the comfort that she feels during lengthy forest school days in nature contrasts greatly with the tightly scheduled time that was allotted to her play outdoors in some mainstream schools.

“There’s just so much tarmac,” she said, referring to the twenty-minute yard time at her last school.

Aed (18) is also Marc’s student, and a student who is passionate about nature and ecology. He had similar experiences to Matilda where a lot of his mainstream school experience with the outdoors was on tarmac.

“We could see a woodland patch and pond from the schoolyard but we weren’t allowed go there,” he said.

Aed particularly appreciates the interconnectedness and interdependence with nature that he and Marc and their fellow forest school students gain from spending time sitting quietly outside and observing nature.  Aed feels that the connection that is developed in quiet “sit spots” offers students a meditative experience akin to Zen Buddhist practices. This experience is often one that is calm, safe and grounded in the present moment. Taking quiet time to observe bird patterns and the elements “gradually builds an awareness of yourself and an awareness of your place in nature,” Aed told me.

Ted (10) is a student at Wicklow Democratic School who started his formal schooling in an outdoor Kindergarten.

“It was amazing,” Ted said about this outdoor Kindergarten. “We’d be out all day, and only came in for meals.”

“Even in freezing rain?” I asked, thinking of my own avoidance of the cold.

Ted nodded, “There’s no such thing as bad weather, only bad clothes.”

Ted reflected on some outstanding memories in that school – one being when he and other students had to bring a dead tree down to the ground with ropes, and he counted fifteen roots that sprung out of the ground.

“It was there that I grew a love for sticks,” Ted continued.

Ted told me how much he enjoyed collecting sticks to clear paths through nettle bushes, dig, drag around, and even use them to play golf.

“We only got thirty minutes of P.E. a week, we were trapped indoors!” he told me.

This feeling of being trapped indoors encouraged Ted to sign up for Marc’s forest school and then enrol in Wicklow Democratic School. Nowadays in school, Ted enjoys reading a book on the main hall’s windowsill and feeling the sun from the window warm his back. He loves building fires in the mornings during Home Groups, and drinking peppermint tea by these fires. A recent moment of excitement for Ted was discovering a lovely “surprise in the dirt” of the school grounds with facilitator Liz.

“We were looking for things in the garden to use to make a bird feeder, and then Ted found potatoes! Maybe we planted them last summer?” Liz asked.

No one could remember when exactly potatoes were planted in the school, but our facilitator (and Aed’s mom) Ciara just nodded and said, “Potatoes just spring up everywhere like that.” Ted and his mother made chips with the surprise finding. 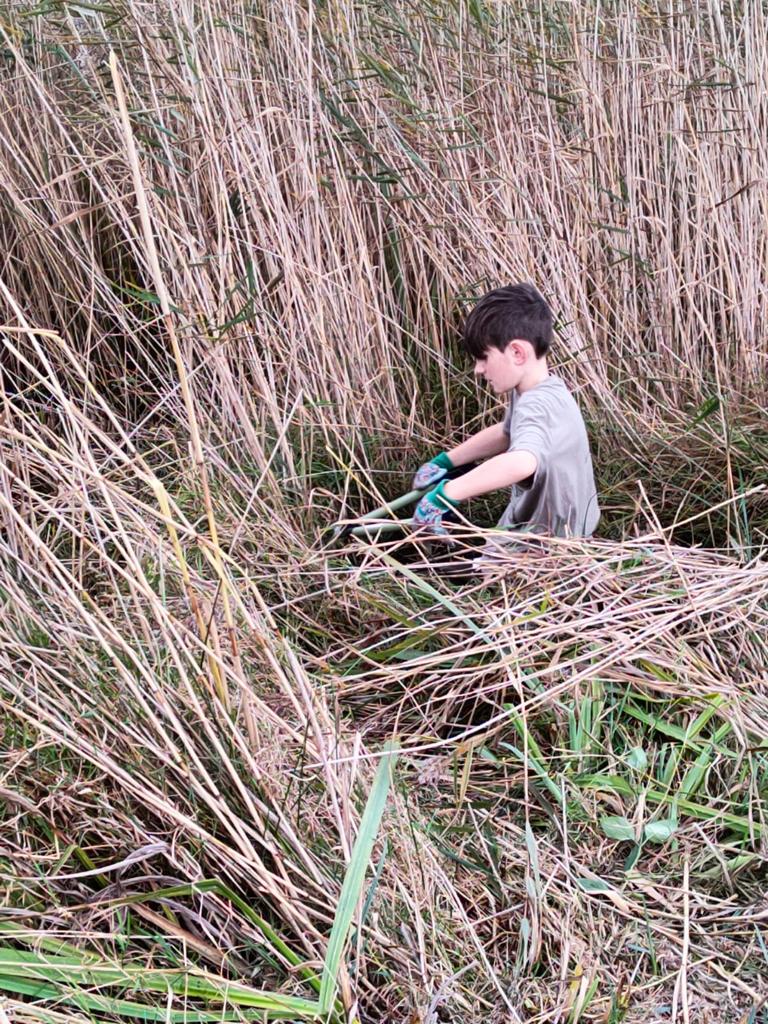 At home, Ted likes to observe animals and learn about them by closely watching their behaviours and appearances.  Ted and his father recently used an onion bag with bacon in it to catch crabs.

“We let them go after we caught them,” Ted said to me. “I loved watching those creatures plop over the edge of the pier. We counted them as they plopped back into the water.”

“How many did you catch?” I asked him.

“One hundred and seventy,” Ted answered.

Ted nodded, agreeing with me.

Ted’s math and science class with live crabs made me think of Wicklow Democratic School’s philosophy that emphasises how children learn through play, and through seeing, doing and learning about their own interests in an organic manner. I thought of how joyful, excited and yet very calm and centred Ted appeared when talking about nature, and I reflected on how lovely it is to watch Ted and other students like Matilda read books under trees or by sunny windows.

And yet time spent in nature is not all gentle creatures and sunshine. Marc, Matilda, Ted and Aed all told me that managing unexpectedly large fires, putting up tents in sudden storms, rationing food supplies and water, navigating dark woods and making and using effective tools can definitely feel like scary and intense moments of survival.

“But once you have that respect and relationship built, both the challenges and the easier moments are enjoyable in their own ways.” Marc told me. “You have to meet nature where it’s at.”

“Like how Wicklow Democratic School tries to meet students where they’re at and not impose policies like standardised tests.” I said to Marc.

I thought of how often people I knew complained about the rain in their busy city lives, and how different this outlook was to meeting the rain with respect and working with it during camping trips, or using the rain to slide even faster down muddy hills into puddles (another one of Ted’s favourite activities during his outdoor Kindergarten experience).

When Covid-19 hit, people in cities, like me, were suddenly signing up for online mindfulness classes in an attempt to stay present and curb fears about the unknown future. Adults everywhere were anxiously downloading meditation apps with rain sounds and listening to these in between all the terse and sometimes aggressive announcements or arguments on the Covid-19 pandemic that were streaming nonstop through the TV. The freezing cold Irish sea was suddenly met with reams of city-dwellers who’d figured they’d brave the sea since their gym pool was closed, only to discover just how good the sea is for mental and physical health. Family and friends had no options but to connect with each other outdoors. A couple of my friends and I shared moments taking pictures of hikes, sea swims and afternoons spent sitting by trees, and many people commented how they’d had to cancel trips abroad but weren’t actually too upset since they started venturing outside and looking for nice spots in their own counties. We had forgotten how gorgeous Ireland is. The pandemic, for many and for myself included, was a violently unexpected reminder of the uncertainty of life and of nature, but it was also a reminder of its brilliance.

When I listened to students at Wicklow Democratic School talk about nature, I had many moments where I thought that their self-reflection, their eloquent description of their connection with nature and their ability to be present, seemed so natural for them but had taken thirty-five years and a pandemic for me to fully realise. I saw that the pandemic was re-teaching adults all over the world what these forest school students were developing and growing all along by really nurturing those innate qualities sometimes overlooked in society – being present, working with what nature (or life) throws at us, finding calm in storms, knowing how to centre yourself, and prioritising connection.

Ted spoke about how he’d connect with his friends at the outdoor Kindergarten by sitting in a circle with them and singing songs.

“Those songs are burnt into my memory,” he told me.

I took a minute to think of the memories that come alive for me when I reflect on my own school experiences, and memories that stand out in my life as a whole. I realised that like Marc said about nature – it all comes down to connection. I’m much more likely to remember lines from a poem that nearly made my best friend cry in English class than the rules of iambic pentameter. I’m more likely to remember details of the 1916 Rising from interesting conversations with funny history teachers or chats with my sisters than I am likely to remember any major details from that five-page essay I memorised on the Easter Rebellion for the Leaving Cert history exam.